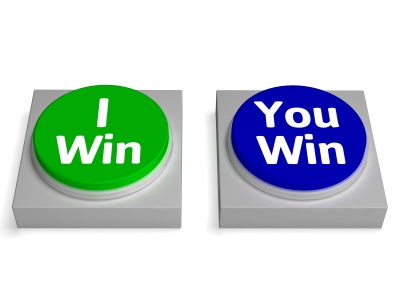 “What do we live for, if it is not to make life less difficult for each other?”  ― George Eliot

In the beginning, lots of people’s definition of Winning had to include the lost of their opponent. But the more we progressed in life, we learned that sometimes winning doesn’t necessarily mean that another party need to lose.

The Concept of Win-Win, has always been the core symbol of a Partnership, and probably the biggest example of partnerships would be the marriage institute, as you would realize that at some point in time, several things in life were not designed to be experienced or even enjoyed as a single individual but more of a couple (and later on more).

This week’s Tip, is about Opening up to the idea of Win-Win, and play a game where the 2 players work together with a common goal that would benefit them both, and that efforts exercised from each, fall in the best interest of the two of them.

I’ve read in so many books about this, and probably the most famous was the masterpiece of Dr. Stephen Covey, “The 7 Habits of Highly Effective People” / Habit 4: Think Win-Win; and I Quote:

Think Win-Win isn’t about being nice, nor is it a quick-fix technique. It is a character-based code for human interaction and collaboration.

Win-win sees life as a cooperative arena, not a competitive one. Win-win is a frame of mind and heart that constantly seeks mutual benefit in all human interactions. Win-win means agreements or solutions are mutually beneficial and satisfying. We both get to eat the pie, and it tastes pretty darn good!

Have a Great Week!
SC

This site uses Akismet to reduce spam. Learn how your comment data is processed.